Active fieldwork has finished but work continues in trawling through documentary and cartographic sources to inform the findings of the salt project. For our flagship site at Ballycastle the archives at the Public Record Office of Northern Ireland (PRONI) have been most useful and fascinating. As well as Ballycastle they contain much of interest on Killough in Co. Down, and Carrickfergus in Antrim (which our visit to the Cheshire Archives also focused on).

Key material relates to the Earl of Antrim’s estate, and although much is concerned with leases, indentures, court cases, debts and other legal wrangling (there was an awful lot of wrangling!) there is much to inform our project. One find of interest was the salt works account book for 1787-8 , which relates to the later site at Broughanlea where the impressive evaporation pans were excavated.

There are charges relating to transporting coal and importing rock salt, and also the export of Ballycastle salt on Scottish boats. We also find building materials, including timber, nails, brick, lime and both slates and ‘straw for thatch’. This demonstrates that some of the buildings were quite naturally taking precautions against the coal fires under the pans, while others, likely storehouses, could continue with thatch. Payment for locks underlines the need to secure the works housing valuable quantities of salt and coal. 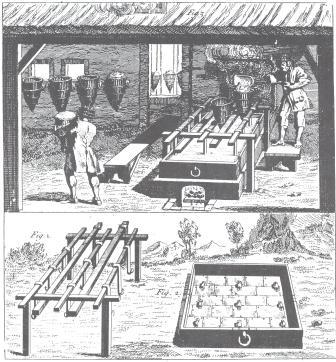 There are expenses relating to general labouring, and also skilled tradesmen such as masons, carpenters, the salt-makers themselves and the salaries of the supervisors at the works. Importantly too were individuals paid for mending the pans (£2.6s) and cistern (5s.5d). It is not clear whether the cistern is the bucket pot on the shore or more likely a tank set by the pans into which rock salt was added to sea water to create the brine. Regardless it must have been thirsty work as £1.7s is listed to pay for ‘drink to the men cleaning the cistern’!

2 responses to “In the Archives…”

Follow The Archaeology of Salt production in Ireland on WordPress.com