The National Survey of salt making sites in Ireland has revealed a number of links with our neighbours in Britain. A range of personal, commercial, political and industrial ties existed in the post-medieval era, which helped and hindered the production of salt in Ireland. As part of the project we decided to drop in on some of the key British sites with Irish connections in addition to other well-preserved sites of salt production.

Off the Rosslare ferry and our first port of call was the site at Port Eynon on the Gower peninsula of South Wales. The area of Port Eynon and neighbouring Oxwich was in the possession of the Mansel family by the early 15th century. In the 16th century they developed interests in coal from nearby Swansea and Neath and had built a castle at Oxwich. The salt works at Port Eynon were also established in the 16th century, under the Lucas family. Producing salt from sea water, it comprises a series of buildings as well as large seawater reservoirs (or bucket pots) on the shore below. Much myth-making has occurred around the activities of the Lucas family in the area, involving smuggling and underground passageways, some of which were embellished to establish property rights. The site was excavated in the 80s and 90s and sadly some of the more romantic notions surrounding the site failed to materialize. Instead it was found to have been constructed in the mid-16th century – a main building used to produce salt and as a dwelling, with three large stone-built reservoirs on the beach (one of which appears to have been vaulted).

The original boulder sea wall to the left (now encased by a modern sea defence), with sea water reservoirs behind.

The shore level reservoirs in relation to the buildings above. The original pan house was in the building to the right – note the aperture in the reservoir wall leading up to it.

A channel leads from the reservoirs to the salt house and the remains of a wooden hand-pumping mechanism was discovered to transfer the seawater to the pan house. The buildings were amended and enlarged over the years – notably with the addition of musket loops in the 17th century. Salt production may have ceased in the 17th century, but the buildings continued to be occupied to the late 19th century. Port Eynon appears technologically advanced (the same pumping apparatus was in use in Scotland 200 years later) and is a remarkable survival – the works exposed by excavation and protected behind a sea wall. 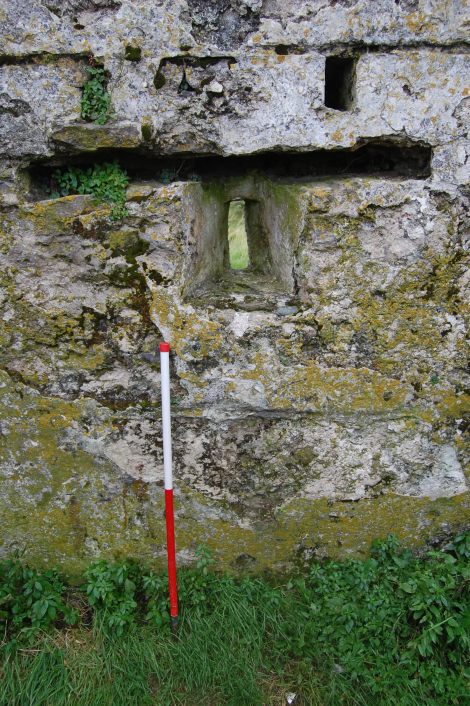 One of the musket loops added to the building in the 17th century.

Close by Port Eynon is Slade Bay, and our Irish links with South Wales are also at Slade – the village on the Hook peninsula in County Wexford. In 1685 William Mansel found himself on the losing side of the Duke of Monmouth’s rebellion. He sought refuge in Ireland. Settling at Slade and being related to the local landowner, Henry Loftus, he was leased the village with its recently completed harbour. William Mansel built the salt works at the village – with a family background in coal and salt production this was perhaps a natural choice. Nevertheless from an archaeological perspective the 16th century site at Port Eynon and 17th century site at Slade bear little resemblance in terms of architecture and features and we must look elsewhere to establish these influences. 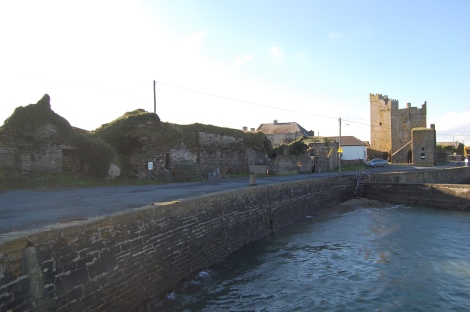 Follow The Archaeology of Salt production in Ireland on WordPress.com